I want to warn you, in most cases, you won’t appreciate the sound quality of record players under $100. Even some of those on this list but, I want to provide you with the knowledge so you can at least know what you’re buying and why it sounds bad.

The 50’s Retro is feature-packed! Including a CD player, FM radio, Bluetooth input and, the ability to record to your PC via USB.

If you’re set on a record player with a vintage look and feel, the Victrola Nostalgic Classic 6-in-1 is the best under $100.

The best record player you’re going to find under $100 is the Audio-Technica AT-LP60. The AT-LP60 is actually a turntable, not a record player so you’ll need external speakers.

If you’re looking for the cheapest record player, the Lauson CL502 comes in at under $40! The CL502’s built-in speakers are surprisingly loud for the compact size.

The best all-in-one record player under $100 I’ve found is the Victrola 50’s Retro. The 50’s Retro is feature-packed, including a CD player, FM radio, Bluetooth input and, the ability to record to your PC via USB.

Why a Record Player Under $100 Sounds Bad

Digital MP3 players can be made small and cheap. Buying an MP3 player under $100 isn’t a challenge and the sound quality will be on par with an MP3 player for $500. Even the most trained ear won’t notice a difference between the two. The cheaper model just might not last as long.

Record players and turntables are a different matter. Vinyl records produce an analog signal. The parts are larger and more expensive. Analog sound is unforgiving when it comes to cheap parts. You can instantly hear the difference between a cheap record player or turntable compared to a cheap MP3 player. Frequency, volume and tone loss are all a result of cheap analog products.

You purchase an expensive MP3 player mainly because it has more features which add value. With record players, it’s the opposite way around. You look at the cheap model and think “wow all these features at such a good price!”. The reality is manufacturers are overcompensating for cheap parts and poor sound quality.

If you look at an expensive record player or turntable, they do one thing, play vinyl records. They usually have one switch or rotary knob and one phono output. The parts themselves are of high quality and they’re usually hand made and assembled.

The best all-in-one record player under $100 I’ve found is the Victrola 50’s Retro. The 50’s Retro is feature-packed, including a CD player, FM radio, Bluetooth input and, the ability to record to your PC via USB. Software is included with instructions for recording your vinyl.

There is a ⅛ inch (3.5mm) AUX input and headphone output.

The sound is thin to be expected but it’s not as bad as most all-in-one record players. There have been reports of some consumers receiving a malfunctioning CD player however, Victrola does allow you to return the record player for a replacement if this is the case.

The 50’s Retro comes with built-in speakers and is available in black, blue and red.

If you’re looking for the cheapest record player, the Lauson CL502 comes in at under $40! The CL502’s built-in speakers which are surprisingly loud for the compact size.

The CL502 has a built-in phono preamp giving you a stereo RCA line output. There is also a USB output for recording to your PC as well as recording software. You can plug in your headphones via the ⅛ inch (3.5mm) headphone output.

The CL502 is available in black and comes with a free replacement needle.

If you’re set on a record player with a vintage look and feel, the Victrola Nostalgic Classic 6-in-1 is the best under $100.

The Victrola Nostalgic Classic 6-in-1 includes a CD player, tape cassette player and FM radio. There is also a ⅛ inch (3.5mm) AUX and Bluetooth input. The only output is a ⅛ inch (3.5mm) headphone connection.

The Victrola Nostalgic Classic 6-in-1 comes in graphite, mahogany and espresso colors.

The best record player you’re going to find under $100 is the Audio-Technica AT-LP60. The AT-LP60 is actually a turntable, not a record player so you’ll need external speakers.

There is a phono preamp with switchable line/phono RCA output to connect to your speakers. The AT-LP60 comes with a ⅛ inch (3.5mm) to RCA cable so you can connect to speakers even if they only have ⅛ inch (3.5mm) AUX-in connection.

The Audio-Technica stylus, the best you will find under $100, delivers excellent sound quality for this price range.

The AT-LP60 comes in black or silver and includes cables as well as a 45 adapter.

Features of a Record Player Under $100

As mentioned, the cheaper record players and turntables have loads more features than the premium models. I’ll briefly discuss these features here so you’ll have a good understanding of what’s relevant or not.

The parts to receive a Bluetooth signal are inexpensive. To transmit Bluetooth requires more parts. Many products are vague in describing the Bluetooth capabilities so do some investigating if this isn’t clear in the product description.

Bluetooth transmitting record players enable you to connect your record player or turntable to a Bluetooth speaker. Bear in mind, Bluetooth and other wireless connectivity are not good for sound quality.

Bluetooth negatively affects sound quality, tone and timbre as well as incurs frequency loss. Vinyl records produce a rich, full-range analog sound. Transmitting that via Bluetooth just waters it down. It’s equivalent to buying a chocolate milkshake and then adding water. You lose all that creamy texture and rich chocolate flavor.

Other outdated playback mediums like a CD player, tape cassette player and radio are features often found on a record player under $100.

While it’s great to play some of your older tapes and CDs, the sound is no different from an MP3. The whole reason people choose vinyl is its superior sound quality.

If you still listen to the radio at home, then there are affordable, more portable radios you can purchase. Some under $20.

My point is this. Don’t be influenced by features. Most often they are going to negatively affect the quality of the record player.

Built-in speakers are not always a value-added feature for a record player under $100. The speakers are often small and manufactured using cheap parts. They sound is almost always thin and tinny. This again takes us back to the watered down chocolate milkshake analogy.

If you are set on purchasing an all-in-one record player, then be aware that your speakers are not going to do your vinyl records justice. You’re better off listening to MP3s.

My advice would be to go with the AT-60LP. If you want a decent sound from a reputable brand, then you can’t go wrong with the AT-60LP. Audio-Technica is an established brand so you know that if anything goes wrong you have quality after sales support.

If you are going for an all-in-one record player, purchase with caution and keep your expectations low when it comes to sound quality and finish. Try and purchase from a recognized brand with a guaranteed return or warranty policy. If you’re purchasing through Amazon, you will have some buyer protection.

The 50’s Retro is feature-packed! Including a CD player, FM radio, Bluetooth input and, the ability to record to your PC via USB.

Matt is a sound engineer and self-confessed vinyl-junkie! His work as a sound engineer includes both live production and venue installations. While traveling the world, Matt shares his knowledge and expertise with us! 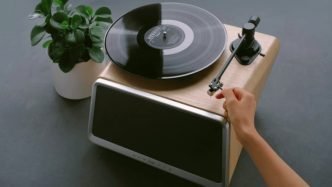 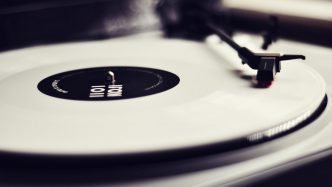 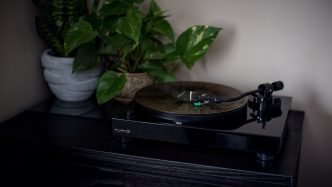